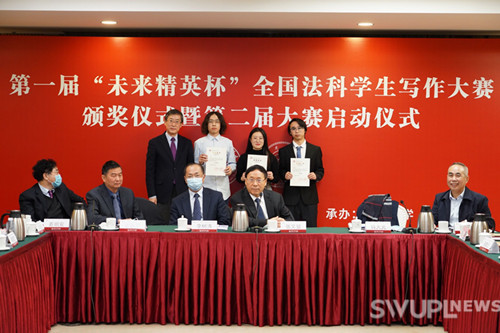 First Prize Award Ceremony (Dong Zezheng, the first from the right in the back row, is a 2018 undergraduate student of the School of Administrative Law) (Photo credit: Office of Academic Affairs) 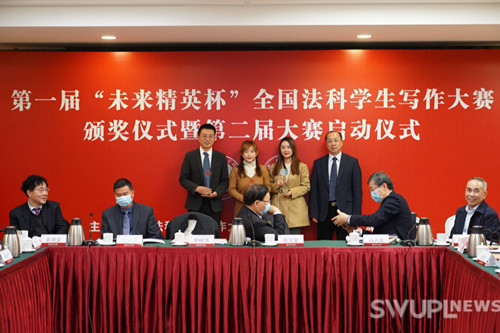 Awarding Ceremony of Organizational Excellence Award (Second from the left in the back row is Sun Qingwen, Director of Practice Teaching and Innovation & Entrepreneurship Section) (Photo credit: Office of Academic Affairs)

Recently, the award ceremony of the First “Future Elite Cup” National Writing Competition for Law Students was held on December 20, 2020 at the China Hall of Science and Technology (Beijing). The competition attracted more than 2,000 students from more than one hundred universities, including Peking University, Tsinghua University, Renmin University of China and our university, with 1,875 original works (including collaborative works), and finally 78 awards were given out, of which our university won 6, tied for second in China. It is worth mentioning that Dong Zezheng, a 2018 undergraduate student of the School of Administrative Law of our university, won the first prize with his article Kelsen’s Pure Law Theory and its Modern Significance.

It is reported that the First “Future Elite Cup” National Writing Competition for Law Students started in August 2019 and came to a successful conclusion in December 2020. The competition has received attention and reports from authoritative media such as Guangming Daily, Rule of Law Daily, Procuratorial Daily, People’s Daily Online and China Education News, and was selected as one of the Top Ten Events of 2019 in legal education, which is a highly influential event in the field of legal education and teaching.