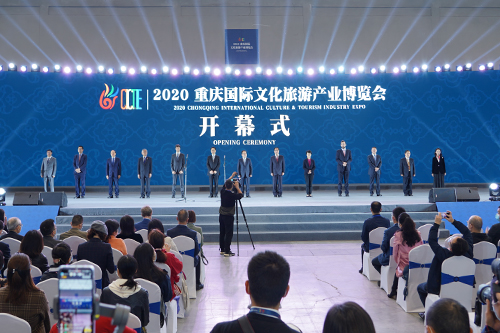 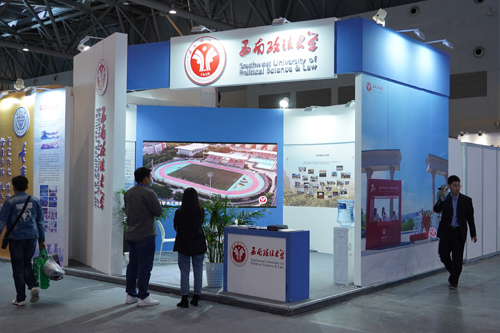 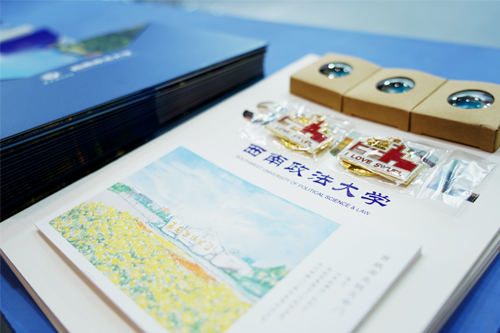 Promotional materials for the exhibition booth (Photo by Cai Zhen) 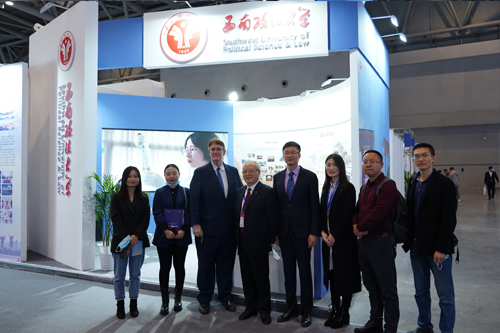 As introduced by the Vice President Yue Caishen, by relying on its own disciplinary advantages, the SWUPL has opened Ph.D. program for ASEAN high-end rule of law talents, LL.M. program in “China Law” for overseas students and other international graduate programs, forming an internationalized school running feature of emphasizing on ASEAN, facing the “Belt and Road”, and radiating European countries and the United States.

The university by recruiting government officials from the legal field, researchers from academic institutions, senior business executives, lawyers and legal personnel through an order-based and class-based training model, cultivate people who know, love and care about China to serve the country’s diplomatic strategy and the “Belt and Road” Initiative.

The SWUPL and the Royal University of Law and Economics of Cambodia jointly organized the “2+2” Overseas Cooperative Undergraduate Program, and actively carried out the “Belt and Road” Legal Talent Experimental Class “Bilingual And Double Laws” Program, the Foreign-Related Legal Talent Experimental Class “Overseas Course” Program, and the International Law Talent Cultivation Program, which are designed to cultivate international rule of law talents with international vision, fluent in English and ASEAN languages, well versed in Chinese law, and familiar with the laws of ASEAN countries.

According to the 2019 Annual Report of Chongqing Higher Education Opening Up to the Outside World , the total number of international students and the number of international long-term students at the university are ranked fourth among universities in Chongqing and second among local universities in Chongqing, making active contributions to the Chongqing’s expansion of education to the outside world. The alumni of the university from countries along the “Belt and Road” have actively promoted the cooperation between our university and the universities in their countries, and facilitating the economic and trade cooperation between their cities and Chongqing, which has provided strong talent guarantee and intellectual support for Chongqing to play a supporting role in the development of the western region in the new era, a leading role in the joint construction of the “Belt and Road” and a demonstration role in the green development of the Yangtze River Economic Belt.

Up to now, the university has signed and renewed 135 exchange agreements with famous universities abroad, and established 11 overseas practice and training bases. In 2017, a total of 33 students from 13 programs were selected for the Ministry of Education’s “Outstanding Undergraduate International Exchange Program”; the university ranked first in Chongqing in the number of state-sponsored programs and one of the highest in the number of excellent undergraduates. Relying on the China-ASEAN Law Research Center, the university has actively carried out the construction of legal think tanks of countries along the “Belt and Road”, and the Center was selected by the Ministry of Education in 2017 as the “Country and Area Studies Center”.

“Guided by Xi Jinping Thought on Socialism with Chinese Characteristics for a New Era, our university will actively respond to and implement the strategy of expanding education to the outside world, actively respond to international diplomatic strategy, think globally, constantly improve the level of internationalized education, and strive to cultivate international rule of law talents adaptable to the development needs of the new era”, said Vice President Yue Caishen when talking about the university’s future plans for the development of international education.