Visit by Ai Hongge, Deputy Director of Chinese Service Center for Scholarly Exchange of the Ministry of Education, and His Delegation 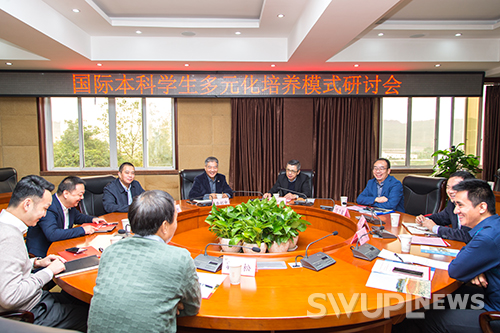 At the conference (Photo by Jing Ke) 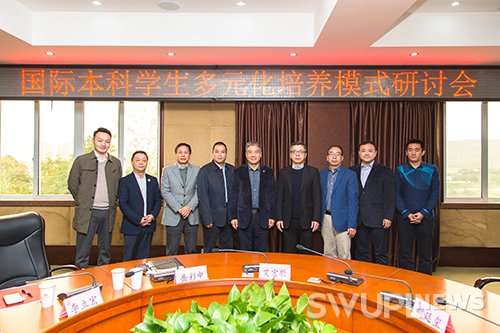 In his speech, Vice President Yue Caishen welcomed Ai Hongge and his delegation, introduced the university’s talent cultivation, faculty construction, discipline construction and curriculum construction in light of its 70-year history of school running, and acknowledged that, under the guidance and care of the Chinese Service Center for Scholarly Exchange of the Ministry of Education, Southwest University of Political Science and Law, relying on its own advantages and infiltration of campus culture, has developed the international undergraduate education model towards diversification, hierarchization and dynamism through a series of initiatives such as “Three Integrations” and “Five Identicals”. It was hoped that the two sides would broaden the cooperation and exchange between our university and the Chinese Service Center for Scholarly Exchange on the basis of the existing cooperation framework, and made the “2+2” international undergraduate program an important part of the University’s diversified talent cultivation system, so as to better realize the new pattern of opening up of education to the outside world in the new era, and cultivate more foreign-related legal talents with international vision, well versed in international rules and are able to participate in international affairs and international competition.

Ai Hongge, after being introduced in detail the inputs given and importance attached to the “2+2” Program by the SWUPL, fully recognized SWUPL’s training model and mature experience in the “2+2” Program, highly affirmed the integration of advantageous disciplines and the use of the alumni platform, and praised the educational commitment of our university. He put forward four points of hope. First, we should have educational commitment and devotion in implementing the “fostering integrity and promoting rounded development of people” to the word; second, we should run the school in a standardized, rigorous and innovative way, improve the internationalization and hierarchization of university education, and highlight the modernization of education in the background of the new era; third, we should develop ideological and political education courses for international undergraduate 2+2 students in a targeted way so as to cultivate socialist builders and successors in line with the new era; and fourth, we should firmly control the brand building and development of specialty majors because quality and reputation are the fundamental and guarantee for the long-term development of the project.

At the meeting, the two sides also conducted in-depth exchanges on a series of matters such as foreign-related legal talent training, alumni association construction, integration of publicity resources, employment of returning students, and internships in international organizations.