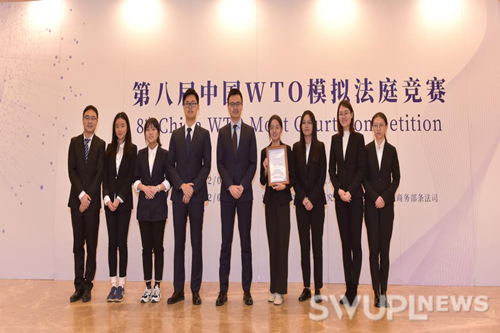 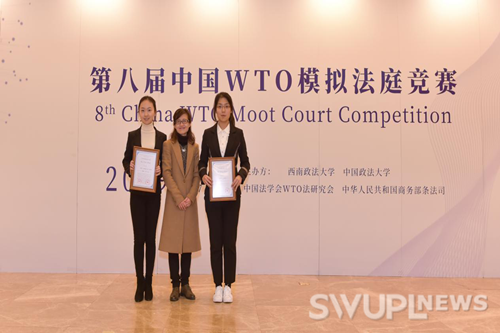 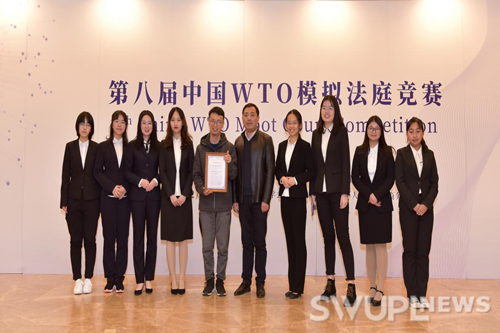 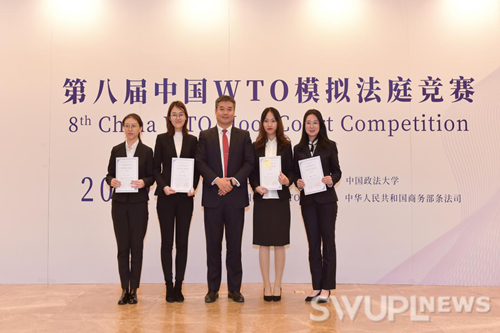 On the morning of December 6th, the opening ceremony of the 8th WTO Moot Court Competition was held in Lingnan Hall of SWUPL library. Guests including Yang Guohua, Professor of School of Law of Tsinghua University and Vice President of WTO Law Research Society of China Law Society, Prof. Qi Huan, Deputy Dean of School of International Law of CUPL, Gong Yaochen, Principal Staff Member of WTO Legal Affairs Office of Department of Treaty and Law of Ministry of Commerce of the People's Republic of China, Zhou Xiaokang, Under-Secretary-General of WTO Law Research Society of China Law Society, Yuan Yongxin, Vice President of SWUPL, scholars from other universities and domestic experts engaging in WTO Law affairs attended the opening ceremony.

At the opening ceremony, Vice President Yuan Yongxin extended a warm welcome and sincere greetings on behalf of SWUPL to guests coming from afar, participating teams from different universities as well as teachers and students present. He mentioned that SWUPL, as one of the hosts and founding members of the competition, paid close attention to and strongly supported every competition. Up to now, China WTO Moot Court Competition had been successfully held for seven times and received a variety of approval, becoming one of the most influential moot court competitions among universities. It was hoped that more universities would join in China WTO Moot Court Competition and more excellent students would improve their legal practical skills in WTO Law field through this competition, contributing to the construction of Chinese WTO legal system.

In the speech, Yang Guohua expressed his expectations for this competition and wished that everyone could pay more attention to the rules of WTO even outside the competition.

Qi Huan indicated in her speech that besides the challenges encountered by WTO, the rigid demand of multilateral trading system should also be taken into consideration. She also wished the competition a full success.

From 10 a.m. to 17:20 p.m. on December 6th, the preliminary of the 8th WTO Moot Court Competition was held in Liyu Zhizhi Building of SWUPL. After three rounds of preliminary competitions, four teams from SWUPL, CUPL, UIBE and Nankai University made it into the semi-final.

At 9:30 a.m. on December 7th, the semi-final was held in Liyu Zhizhi Building of SWUPL. In this round, SWUPL competed with CUPL and UIBE was against Nankai University, fighting for the spots of the final. Eventually, UIBE and SWUPL entered the final.

On the afternoon of December 7th, the final was held in Lingnan Hall of SWUPL library. After fierce contests, UIBE won the champion and SWUPL won the second place, while CUPL and Nankai University won the third place.