The Supreme People’s Court of the People’s Republic of China, SWUPL and Other Institutions Jointly Established the Unified Platform for Foreign Law Ascertainment 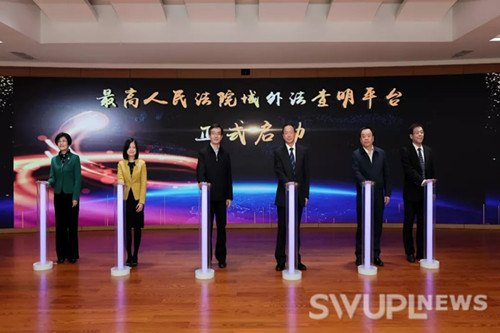 At the scene of the launching ceremony (Source: the Supreme People's Court of the People's Republic of China) 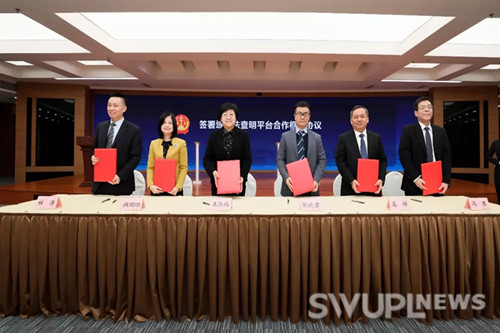 At the scene of the signing ceremony (Source: the Supreme People's Court of the People's Republic of China)

On the morning of November 29th, the launching ceremony of Foreign Law Ascertainment Platform of the Supreme People's Court (SPC) was held in Chongqing. The SPC, in collaboration with institutions including the China-ASEAN Legal Research Center of SWUPL set up the platform. Fu Zitang, President of SWUPL, Yue Caishen, Vice President of SWUPL, Zhang Xiaojun, Dean of School of International Law as well as Head of the China-ASEAN Legal Research Center and other directors attended the ceremony.

The SPC launched the Foreign Law Ascertainment Platform on the website of the China International Commercial Court (CICC), marking the official establishment of a unified platform for foreign law ascertainment for all people's courts nationwide. In order to further the development of the Platform, five institutions including Civil Adjudication Tribunal No.4, China-ASEAN Legal Research Center of SWUPL, Base of Supreme People’s Court of China for Discerning Hong Kong, Macau, Taiwan and Foreign Law of Benchmark Chambers International & Benchmark International Mediation Center, the Foreign Law Ascertainment and Research Center of the China University of Political Science and Law (CUPL), Center for Proof of Foreign Law of East China University of Political Science and Law (ECUPL), and Center of Ascertainment of Foreign Law of Wuhan University, jointly signed the Cooperation Framework Agreement and collectively established the Platform. Meanwhile, 31 members of the International Commercial Expert Committee from 14 countries and regions engaged by the SPC also played their roles in the process.

It is known that the launch of the Platform is an important measure by the SPC to implement the Opinions Concerning the Establishment of the Belt and Road International Commercial Dispute Resolution Mechanism and Institutions issued by the central government. It effectively breaks the "bottlenecks" in the difficulty of ascertaining foreign law in foreign-related trials and further optimizes the law-based business climate. The Platform is accessible to people's courts at all levels, parties in litigation and their attorneys, enterprises of cross-border trade and investment or other cross-border affairs, legislative and administrative organs as well as arbitration institutions or other entities need to know foreign laws.