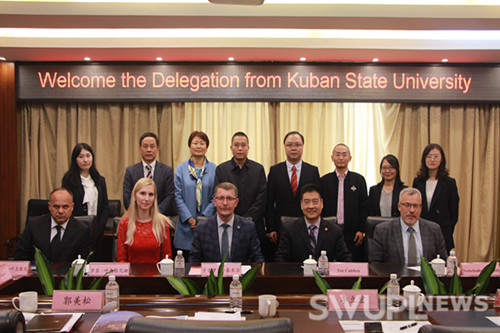 At the scene of the meeting (Source: International Cooperation and Exchange Office)

On October 31st, Vice President Khagurov Temyr, Vashchenko Aleksandr, Dean of Faculty of History, Sociology and International Relations, Rotai Evgeniia, Deputy Head of International Affairs Department and Luparev Evgenii, Deputy Dean of Faculty of Law of Kuban State University visited SWUPL. During this visit, Kuban State University and SWUPL had a discussion on co-founding an academic exchange center. Also, the two sides reached a consensus on extensive cooperation in areas including teachers’ and students’ exchanges, publishing as well as co-holding international academic conferences on the platform of this center. Vice President Yue Caishen and other relative directors attended this meeting.

At the meeting, Vice President Yue Caishen warmly welcomed Vice President Khagurov Temyr and his delegation. He introduced some basic information about SWUPL and specific cooperative contents to be discussed. Yue also conveyed his wish to carry out comprehensive collaboration with Kuban State University through this visit.

Vice President Khagurov Temyr affirmed the influence of SWUPL in the field of law. According to him, Kuban State University, with the largest Faculty of Law in South Russia, had much in common in the development history with SWUPL and also shared a solid foundation in collaboration. Therefore, he indicated that a cultural exchange center would soon be set up in Kuban State University so as to lay the groundwork of co-founding Confucius Institute in the future.

Moreover, based on the cooperation framework agreement, the two sides agreed on signing a specific contract on the basis of this meeting as soon as possible and then launching the cooperative project in an all-round way. It was known that Kuban State University and SWUPL signed Memorandum of Understanding on Cooperation in 2017. And in 2018, SWUPL sent a delegation led by Vice President Yue to visit Kuban State University for the first time. During the visit, the two sides reached vital consensus on cooperation, laying a sound foundation of future collaboration.