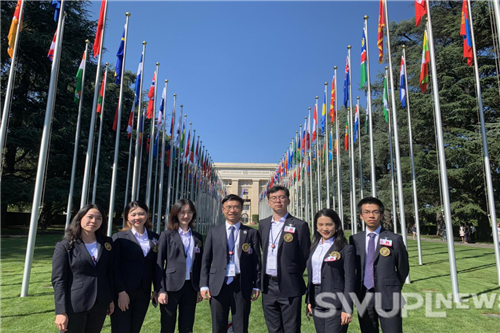 The group photo of SWUPL team members in front of flags of nations in United Nations Office at Geneva (Source: Institute for Human Rights) 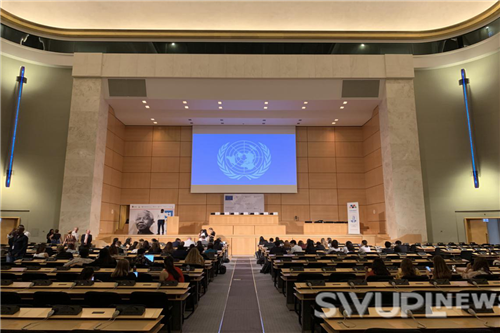 At the scene of the competition (Source: Institute for Human Rights) 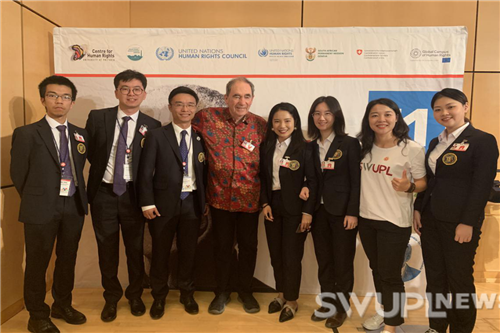 The group photo of SWUPL participants and Sachs (Source: Institute for Human Rights) 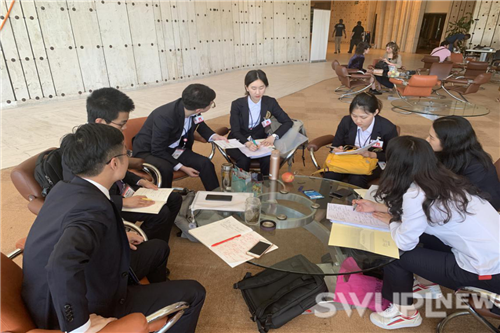 From July 15th to 19th, the 11th Nelson Mandela World Human Rights Moot Court Competition was held at Palace of Nations in United Nations Office at Geneva. Instructor and leader Mr. Zhou Li from Institute for Human Rights and six team members including Zheng Lulu, Ouyang Yi, Zhang Yujia, Jiang Ningyi, Gou Sixu and Zhang Han formed the SWUPL team. After the fierce competition in regional qualifier and global final round, the team won the third place of Best Memorial Award, ranking higher than many world-renowned universities like University of Oxford, Yale University and the Chinese University of Hong Kong on this award. It was the highest rank of one single award Chinese universities had ever achieved in this competition.

Nelson Mandela World Human Rights Moot Court Competition is the most authoritative and prestigious professional competition in the international human rights field. It is open to students from all universities in the world. The competition has regional qualifiers across the five United Nations regions and the global final round. Participants write memorials for hypothetical cases, which are submitted to, reviewed and ranked by eminent experts in human rights field. The ranking of memorials is the only criterion for deciding whether a team can enter the global final round. SWUPL team entered the final round as it ranked first in Asia and third in the world among about 200 teams worldwide.

At the special invitation of the council, heavyweights including Verónica Michelle Bachelet Jeria, the United Nations High Commissioner for Human Rights, also former President of Republic of Chile, Albie Sachs, a close comrade of Nelson Mandela, also Justice of Constitutional Court of South Africa and Manfred Nowak, a world-famous scholar of human rights, interacted with participants and acted as the judges in the final round. During the final round, SWUPL students debated with students from Ruhr University Bochum in Germany, University of New South Wales in Australia, Polytechnic College of University of Malawi in Africa and School of Law of Kathmandu University in Nepal, showing their solid knowledge base of human rights and flexible abilities. Finally, SWUPL team ranked 27th in the global overall ranking.

To prepare for the competition, Mr. Zhou held training programs in SWUPL. He invited teachers from different schools to give guidance, including Christian Mestre, former President of University of Strasbourg, Ning Shuguang from Center for International Communication Studies, Xiao Junyong from University of International Relations, Lu Zhian from Human Rights Center of Fudan University and Yang Bochao from Institute for Human Rights of China University of Political Science and Law as well as ten SWUPL instructors including Quan Xiaolian, Ma Zhihan, Zhu Yuanqing respectively from School of International Law, School of Administrative Law and School of Foreign Languages. Mr. Zhou also invited former participants of the competition to share experience and specifically instruct how to read the literature, study cases, write memorials and simulate debates in the later phase, laying a solid foundation for the competition.

In recent years, SWUPL has been actively promoting “Double First-Class” construction. Exploiting its role as a national human rights education and training base and a national institution for construction and cultivation of high-end think tanks, Institute for Human Rights has been committed to the cultivation and reserve of national legal talents in human rights field. It was the second time for Institute for Human Rights to lead a team to participate in the international human rights competition on behalf of SWUPL. They made a new breakthrough, greatly improving the international image of SWUPL.